Design and development for a Portland coffee roaster app. 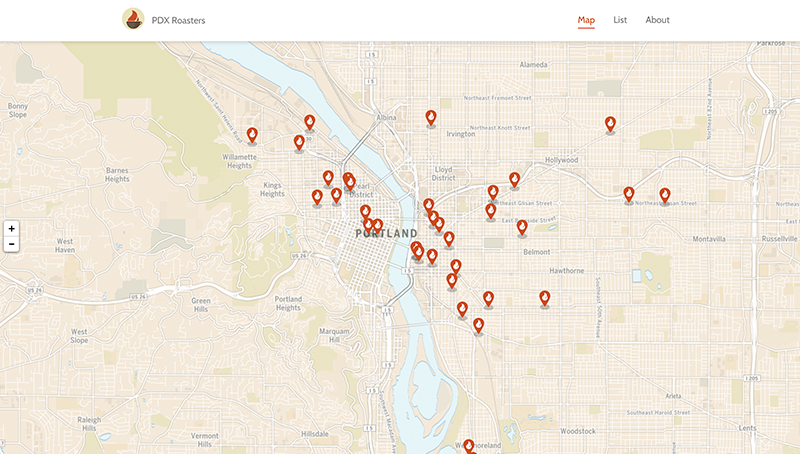 This project started as the vision of my friend Isaac Viel. It's essentially meant as a way for Portlanders—and those just visiting—to find a great cup of coffee.

Isaac generated all the content and another great developer friend of mine did all the back end. I got to work on the design front end bits.

There were a number of fun challenges for this project. Side projects are always fun, and this was no different.

One of the most useful ways of working with a set of locations like this is obviously in a map view. My mapping API of choice is generally Leaflet. It's lightweight, simple, fast, and works well with a variety of tooling sets and development styles. It has a really beautiful API that is just big enough to do most of what you'd need to do with a map, but small enough that all the name spaces and methods can fit on the screen at once.

Essentially you create a map, add some controls, and then after that almost everything is just a layer on that map. It's a good model that works well for simple use cases especially, but it also has a really nice ecosystem of plugins if you need more. It even has a map.locate() method which uses the Geolocation API to locate a user's browser.

I did a pretty major refactor focusing on performance and load time a while back, and I learned quite a bit. While I worked, I did some bench marking of before and after:

Removing requests, ensuring that you have gzip working, and removing third party dependencies entirely are all good ways to improve performance. While I was working I played with some really nice performance testing tools, especially the PageSpeed Chrome extension which gives you PageSpeed insights directly from your dev tools.

The initial version of the site used jQuery for AJAX form submission and DOM manipulation. I decided it would be a fun challenge to remove jQuery and replace it with Vanilla JavaScript. The most challenging thing to replace was form submission. Working with XMLHttpRequest directly is still a bit cumbersome, but it's not too bad once you get your head around it. In the future, hopefully the Fetch API gets wider support and we can all just start using that soon.

When there is no image of the roaster, the background image is generated with the Google Maps Street View Imagery Service.

The back end is built in Django, and this was my first time using that. It's actually a really great CMS/back end solution. The admin interface, while a bit homely, is very functional, and working with their templating system (DTS) is really nice.

Creating individual views for all of the roasters was very simple.

We've had a lot of positive response from people who say they use the site all the time. It's become a very useful tool for people who are are a part of the Portland coffee world. If you're into coffee, check it out!