Create a new GitHub release with a zipped folder, custom release message, and user credentials all in a single Grunt command. 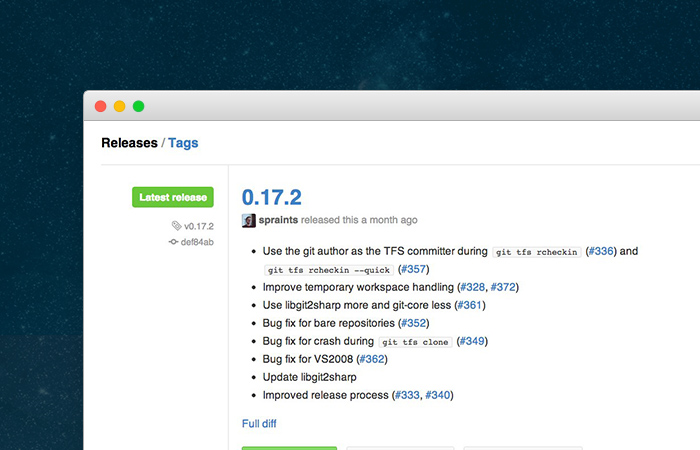 Edit: I now use gh-release for this now as it saves your GitHub credentials and you can use it with or without Grunt.

If you've used GitHub releases you know how great they can be. Essentially you draft a new release on any of your GitHub repositories, choose a specific tag, enter a title and a description, and click a button to create a neat and tidy little package that users can download and use.

Recently I realized that creating these releases was one of the only things I was doing by hand, and that seemed inefficient, so I endeavored to solve the problem with Grunt. It was all very easy with Grunt plugins that were already written, but there were a couple gotchas, so I thought I'd write it up for future generations.

It's probably a good idea to add name.zip (or whatever you end up naming your file) to your .gitignore so you aren't tracking checking it into git.

The most important plugin to use was obviously grunt-github-releaser. I chose this one, but there are a myriad of grunt plugins that handle creating releasing on GitHub and any would probably work. This handles almost all of the heavy-lifting for you in terms of creating a GitHub release. A sample would be something like this:

Now what you should be thinking in your head is "I would have to change all of these settings every signle time I create a release!". Let's fix that. First, use the version number in your package.json as your tag and title:

Now all that's left is the body (description) of the release. I have been just parsing this from my CHANGELOG.md, but there are numerous ways to handle that.

I solved this problem using grunt-prompt. This lets us ask for a username and password when the grunt task is run. After you npm install and load the grunt task, configure prompt like this:

This will set the values of grunt-github-releaser to be whatever the user enters in the prompt. You could even add a prompt for a release body here if you don't have a way of getting that yet!

Now, you would just register a grunt task that runs these plugins in the right order and give it a sensible name like, I don't know, release:

Now you can just use grunt release. Enter your username and password and you're done!

As always, if this makes no sense, is wrong, or could be improved, you should tweet at me: @paulcpederson.